My 6 and a half years old son, Brendan, can read very well and he likes reading signboards, posters, names of shops and anything that captures his razor-sharp eyes whenever we are out for meals, shopping, or merely window-shopping. And yes, that includes receipts too!

The first time he saw a receipt with the words "Thank you, please come again", he said that we should go back again to the shop we were visiting. He kept insisting and reminding us to go to the shop again until daddy got fed-up and told him to just keep quiet. He then showed us the receipt and said that we really have to come back again as what was mentioned in the receipt (see pic below). 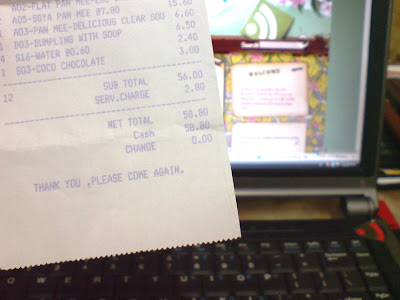 Nowadays, he'll still continue telling us that whenever he spots the words on our shopping receipts and then asked why would they want us to go back again?

Last night, we went to Tesco to do some grocery shopping and Brendan started screaming, "Mummy! Mummy! We must buy this and this and this and this!!" Oh well, of course I said "No" but he kept pushing for me to buy the various types of frozen food in the freezer and went on showing us what was shown on the freezer. The words "Must Buy" were pasted on it! Eryn quickly ran to the freezer and started spelling out the words loudly and joined in the chorus with her brother, "Must buy! Must buy!" hahahaha. 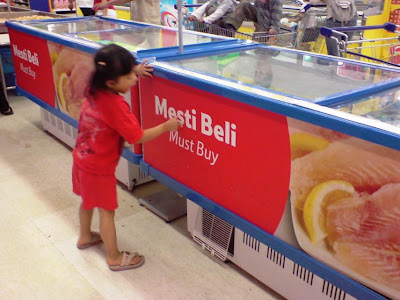 Brendan, ooooh Brendan!!
Posted by Babysmooches at 11:51 PM 9 comments: Links to this post

Email ThisBlogThis!Share to TwitterShare to FacebookShare to Pinterest
Tags : Brendan

We spent a few days in my parents' place in the recent school holidays.

One of the evening, we went to one of my aunt's house to make pizza. We got the dough from one of my uncle who owns a bakery. The dough was left-overs from making bread and there were so many of it that we actually made almost ten trays of pizzas, big and small. 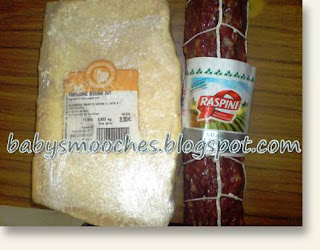 A few years back, my brother bought some Formaggio reggiano cheese and Napoli salami direct from Italy during his one year working assignment there. The cheese had a strong smell but was quite nice when eaten, while the salami, flavoured with peppercorns was a tad too salty and a little chewy.
Together, my mum, two aunts, one cousin and me made our versions of pizza which was basically salami and the cheese, spreaded with tomato puree and topped with green pepper, button mushrooms and big onions. and another version with sausages, big onions and mix vegetables and another version in a big tray with added canned pineapple.
Turns out pretty, don't they? They taste yummy too! 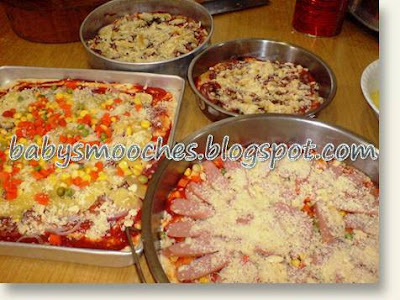 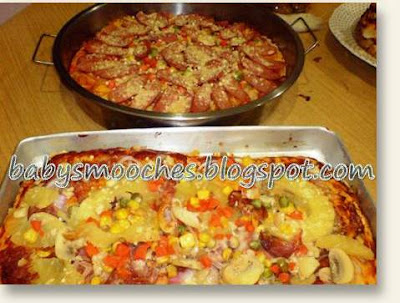 after
Posted by Babysmooches at 5:02 PM 7 comments: Links to this post

Brendan and value of money

DH and I don't believe in pampering our kids too much especially when it comes to toys. DH's friends gave us a lot of lego sets and lots of little cars as their sons have all grown up. Brendan loves playing with those toys and masak-masak with his little sister as well. Eryn is comfortable playing those little boy's toys with Brendan, but mostly love dressing up her Barbie doll, also a hand-me-down, or playing house with another baby doll.

Last night, I saw Brendan staring and looking at a tiny lego brochure and started asking me what are those toys for and the difficult pronounciation of the names of some of those toys. After a while, this is how the conversation goes ;

Mummy : Brendan, which one is your favourite in this brochure?
Brendan : Hmm..... I think this one.
Mummy : Ok, what if mummy buy one of this for you?
Brendan : It's ok, I don't want one.
Mummy : Well, I can buy you a small one, but you must take good care of it.
Brendan : No, lah... Don't want lah, I scared afterwards you got not enough money to use.

Well, I'm stunned. I wonder where did he get that kind of idea?

Another scenario in Toys R Us ;

Eryn : Mummy, I like Toys R Us, they have so many toys. Can we stay here longer? I like this one, mummy.
Mummy : Oh! This is so expensive! You all can see but don't ask me to buy. I'll get what I want to get for you all.
Brendan : Mei-Mei, don't simply buy lah. All these toys very expensive one. Afterwards you spoil it then wasted only. We go home and play cars and masak-masak k?
Eryn : I don't want!! I don't want!! I want to stay here longer!!
Brendan : Come lah mei-mei. Mummy wants to go to work already lah. We stay here so long already.

Brendan : Mummy, how much is a car? I got a lot of money here. RM10 enough or not? Your car so old already lah, I buy for you ok?
Mummy : haha... RM10 only? Where got enough? You need a lot a lot of money.
Brendan : How many zeroes you need?
Mummy : At least 4 zeroes. Maybe one 8, and 4 zeroes.
Brendan : Which is more expensive? Car or house? I buy a house leh?
Mummy : House even more expensive. You need 5 zeroes.
Brendan : But house no need to pump petrol. It should be cheaper.

Sigh! That's my boy and his occasional money talk. Kind of reminds me of my brother when he was young.
Posted by Babysmooches at 4:36 PM 9 comments: Links to this post

Email ThisBlogThis!Share to TwitterShare to FacebookShare to Pinterest
Tags : Brendan

It's Brendan's official first school term break. We have no plans to go anywhere since hubby is away for one whole week in Germany.

However, we went up to Berjaya Hills (previously known as Bukit Tinggi) on Saturday evening, reaching there at almost 5pm, and came back the next morning as hubby had to rest and then pack to leave to the airport on the same night. It's a short getaway, but nevertheless, a fun trip for the kids. 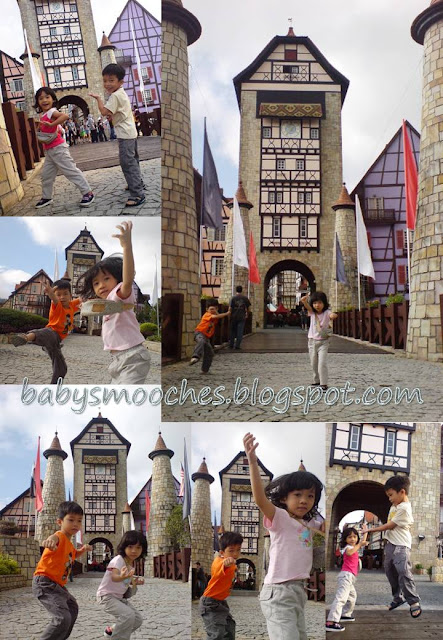 For the kids, most outing, no matter how boring for us adults, would always be fun for the kids. There's nothing much to do there and we managed to take only 2 hours to walk around Colmar Tropicale and to the Japanese Tea Garden. There's some games stall, a kids play area, some restaurants, a tower for the full view of the Colmar Tropicale area and a nice pond with two white swans and two black swans. The kids enjoyed watching the swans very much. 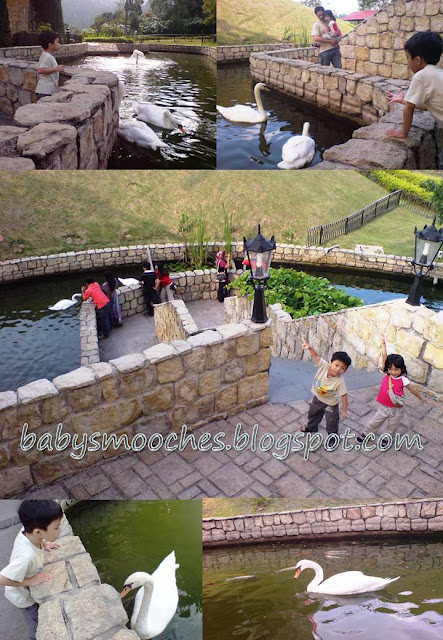 I love the serenity at the Japanese Garden. We could hear plenty of birds and there were lots of bird-watchers and professional photographers up there, at 3,500 feet above sea level, trying to catch a glimpse and get a good photography shot of the birds there. It was 20 minutes to closing time. We had to quickly climb up the very steep hill just to see the Japanese Garden. We took a quick 20 minutes walk and after that, as we were halfway down the hill to the car park, it began to pour!! The rain just came so suddenly that we got ourselves wet. 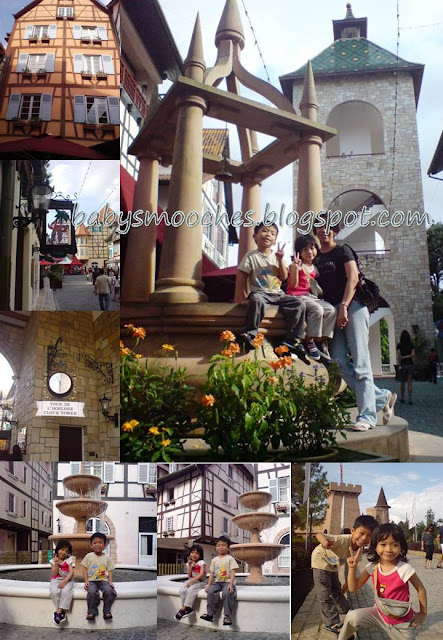 We took a drive down to Kampung Bukit Tinggi for dinner. The claypot fish was our favourite. Hubby loves it so much that he's already planning for another trip with a few friends just to go there to eat and enjoy the fresh air.

A super-short getaway, but a fun and nice one. 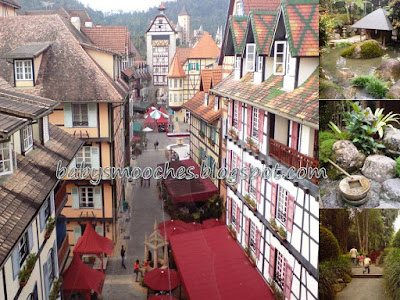 Posted by Babysmooches at 8:54 PM 7 comments: Links to this post

Email ThisBlogThis!Share to TwitterShare to FacebookShare to Pinterest
Tags : Holidays

a baby and her sixth sense

5 years back, my article appeared in The Star papers about Babies and Sixth Sense. Click HERE for the link. Once again, this prove to be amazing!

One morning last week, my brother woke up with excruciating pain and was not able to move. He was so lucky that his SIL was at his house. She immediately called her sister, my brother's wife, to come home and they both sent him to the hospital. He had a slip disc and an urgent surgery was needed and was scheduled in the evening at 6pm. 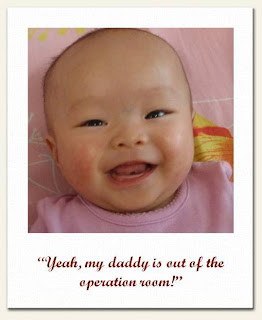 My mum called to inform that an interesting day had happened. My mum is currently babysitting my niece (my brother's 4 months old baby) and the poor little baby, more than 100km away from daddy, was feeling uptight and crying. At 6pm when the surgery was doing on, my little niece started crying and crying and behaving wierdly, as though she knew something was going on. She's only 4 months old, and she could sense something was happening to her daddy more than 100km away.
My mum had to pacify her and calm her down. 3 hours after the surgery, my brother was safely out of the operation theater. That's when my mum talked to my niece and explained that her daddy is out of the operation.
By God's grace, everything went well, and the funny thing after my mum spoke to my 4 months old niece, she immediately calmed down and went to sleep.
Wierd but amazing!
Posted by Babysmooches at 12:31 AM 4 comments: Links to this post

Email ThisBlogThis!Share to TwitterShare to FacebookShare to Pinterest
Tags : Babies

me and my big blunder

I bumped into an acquaintance this afternoon while waiting for a friend. We started chatting when I noticed a lady walking slowly towards our direction and looking at me. I didn't give much thought to it until she stood beside me. It was then that I realise that she's my friend's wife.

I thought that she has that tinge of jealousy in her and he introduced both of us to each other. I extended my hand and shook hers and started a conversation with her so she won't misunderstood me unnecessarily. She began to warm up to me and we chatted for a few minutes.

Oh dear! Oh dear!! I dropped a bomb and I just felt like vanishing right there on the spot!! I turned to her and apologised. Luckily, I was not punched on the spot!

I don't normally ask such things like that to people cos I too have a flabby tummy. I know. I made a BIG blunder. I deserve to be shot dead there and then. I'm quite upset over my stupid blunder.

Please forgive me. Stupid stupid me!
Posted by Babysmooches at 10:48 PM 5 comments: Links to this post 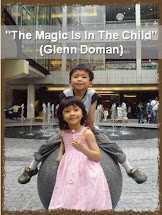 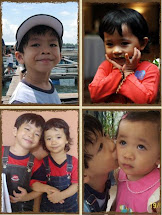 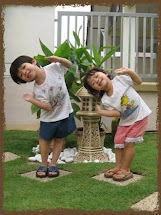